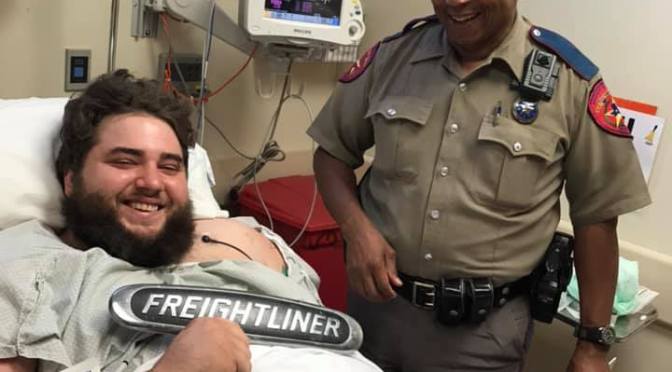 The mother of Bill Mcnutt, the driver of the 18 wheeler that wrecked into a creek off Highway 24 in Delta County yesterday says he is going to make a full recovery.

Besides 12 staples in his leg, the driver of the mangled big rig is doing good. The accident happened late morning on 5/16/2019. Delta County Fire & EMS were dispatched to the area of Highway 24 near the Hunt County Line for a 18 wheeler that had ran off the road. Units arrived on scene, requesting assistance from Commerce Fire.

Commerce Fire arrived on scene calling major damage, one 18 wheeler over a bridge into a creek. Several personal worked quickly to get the driver out of the truck, where we are told the driver walked up to the ambulance.

Benson Brothers worked quickly to get the truck and trailer removed from the creek and loaded up, while handling a Hazmat situation from the fuel tanks on the 18 wheeler leaking.

It is hard to believe someone could walk away from a accident of such, but Bills Mother Sent us this Picture of Driver, Bill Mcnutt holding about all what is left of his Freightliner big rig.

Continued Prayers for you Bill, and a big THANK YOU to the first responders that helped save this guys life.