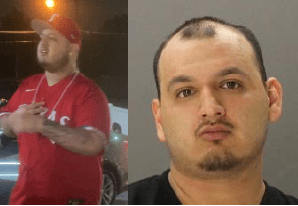 The suspect in the photo below is wanted for murder and has been identified as Juan Bravo AKA “Fooly Bravo” a 27-year-old Latin male. If anyone has any information, please contact Detective Montenegro #6991 in the Dallas Police Homicide Unit at 214-283-4801 or e.montenegro@dpd.ci.dallas.tx.us

On June 19, 2020, at approximately 10:36 pm, a group of females were having a disturbance in the parking lot of the Tepatitilan Restaurant. Two Latin females were fighting when a Latin male wearing a black shirt struck one of the females. The victim then intervened in an attempt to break up the fight and was shot one time by an unknown Latin male wearing a Texas Rangers jersey with the name Andrus on the back. After being shot, the victim, who has yet to be identified ran for a short distance and collapsed in the 500 block of Hollywood. Dallas Fire Rescue responded to the location and pronounced the victim deceased at the scene. The unidentified victim did not have an ID card on his person, therefore the Dallas County Medical Examiner will work on identifying him through fingerprint analysis.

The Homicide Unit is asking for the public’s assistance and is encouraging anyone with information to contact Detective Montenegro at 214-671-3624 or via email: e.montenegro@dallascityhall.com.  Please refer to case #107985-2020.

Dallas Police Department was called to the 9400 block of Olde Towne Rowe a little after midnight Wednesday morning. Caller stated a subject had been shot, and needed medical assistance.

Once on scene units were notified that the victim left in a vehicle headed to the hospital. Officers were eventually able to locate the vehicle at the 7eleven on the corner of Samuell Blvd & Buckner Blvd.

Dallas Fire & Rescue units made scene at the 7eleven and transported the victim to the hospital in an unknown condition.

At this time, we do not have any information on the shooter. We can confirm there is no threat in the area. We will continue to monitor the situation and update as we learn more.

On June 30, 2020, at approximately 6:15 a.m., a passerby found the victim, a 22-year-old Black transgender female, unconscious in a parking lot of the Rosemont Apartments at 3015 E Ledbetter Drive. After contact with next of kin, it was determined that the victim’s legal name was Michael Richey. We have not been provided with a preferred name at this time, and we are asking for the community’s assistance with any additional information. Dallas Fire and Rescue responded and pronounced the victim deceased at the scene from apparent gunshot wounds. Residents at the location reported to police that they heard gunfire around 5:00 a.m., but there are no records of 911 calls at that time.

Dallas police are asking that anyone with information regarding this offense contact Detective Tabor with the Dallas Police Department Homicide Unit at (214) 671-3605 or brian.tabor@dallascityhall.com. Please reference case #114244-2020.

On June 30, 2020, Dakerrick Hamilton, a 27-year-old black male, and Adrian Ashley, a 26-year-old black male, were both charged for the murders of Jennifer Hernandez and Kenneth Wesley that occurred on August 24, 2019, at the 4000 block of Cicero Street. Hamilton and Ashley were already in the custody of the Dallas County Sheriff for two other unrelated murders. They have both been charged with capital murder, a capital felony. Their bond will be determined by a Dallas County Magistrate.

On Saturday, August 24, 2019, at approximately 12:15 a.m., Dallas police were dispatched to a shooting call in the 4400 block of Cicero Street.  Upon arrival, officers found the victims, Jennifer Hernandez, a 39-year old Latin female, and Kenneth Wesley, a 26-year old Black male, shot on the driveway next to a parked green Mercury Grand Marquis.  Dallas Fire-Rescue responded and pronounced Jennifer Hernandez deceased at the scene.  Kenneth Wesley was transported to an area hospital where he died from multiple gunshot wounds.  The Dallas Police Department Homicide Unit is asking for the public’s assistance regarding this capital murder and is encouraging anyone with information to contact Detective Olegario Garcia at 214-671-3994 or via email:  olegario.garcia@dallascityhall.com.  Please refer to case no. 171724-2019.